We are very much looking forward to welcoming back the fantastic trumpet player Pacho Flores.

Pacho Flores is a true friend of the Arctic Philharmonic. Many of us remember him playing the Trumpet Concertos by Haydn and Arutiunian, as well as his marvellous version of Piazzolla’s Oblivion.

«The most impressing concert
with this orchestra that I have ever heard»
Emi Kjeldsberg, Nordlys 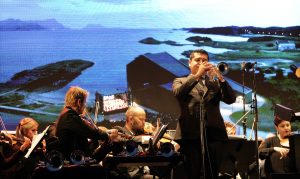 Flores has played with us on tour in Salzburg, Vienna and Amsterdam, and we have made a recording with him on Deutsche Grammophon.

This time Pacho brings with him a Latino American programme. There will be music by Ginastera, Freiberg and Flores himself. Three of the four pieces at this concert will have their Norwegian premiere.

«A marvellous trumpet player and a fantastic orchestra (…) with such a terrific sound.  How is it possible to play like this?” »
Jørgen Mathisen, Avisa Nordland

Pacho Flores has won several awards. He has also won the most prestigious trumpet competition in the world, Maurice André International Contest. Flores has an exclusive recording deal with Deutsche Grammophon.

Manuel Hernández-Silva is trained from the conservatory in Vienna with professors Reinhard Schwarz and Georg Mark. He has been chief conductor in several Spanish orchestras, as well as conducting many European and South American orchestras.